by Sevvel 3.23K views on March 9, 2018 Western GhatsEndangeredEndemic
share
1
Shola Forests covering one side of the 7th hill of Velliangiri Mountains

Velliangiri hills is a known to the others as a pilgrimage center and people see it as “sacred”. For for plant lovers like me, it is a paradise of plant diversity! The Velliangiri hills constitute of different varieties of forests that occur at different altitudes. As the hills ascend, the vegetation changes.

It is said that the entire Velliangiri hiking trail consists of seven hills. The first hill and the foothills are covered in dry deciduous forests. The first hill is the most difficult one as it is full of steps and is really challenging to complete!

The fourth hill is where we come out of the forest and at the end, we come to open grasslands. So, it is a mix of semi-evergreen and deciduous trees and grasslands. You can start spotting the high altitude plants as you reach the top of fourth hill. The fifth hill is full of grasslands and bordering it, are Shola forests! The sixth hill is the same terrain and vegetation and it is in the seventh hill where there are true high elevation Shola forests.

The above photo is on the 7th hill and there are dense shola forests towards the right of the trail. It is really an exciting sight to see those forests that appear like cauliflowers arranged over one another. But imagine them as colored cauliflowers! One can see a variety of shades of green, white, red, cream when looking at the canopy of the Shola forests. The canopy is so dense and closed allowing only a very little amount of light inside.

These forests are the life-givers to the people who live in the plains below. The sholas are interspersed in the grasslands here and there in the depressions in the terrain. The trees are short, stunted, not exceeding 20 meters of height, highly branched and densely leafed. The trees in the shola forests are all covered in epiphytes of all kinds – Moss, Liverworts, Selaginella, Ferns, Orchids, Impatiens and other epiphytic flowering plants. It rains for almost 8 months a year here and the each shola patch creates a climate of it’s own. The shola forests altogether create their own weather by breathing out more water vapour which condenses and falls again as rain.

These forests are also shrouded in fog for the most of the year whenever it does not rain. The epiphytes on the trees help condense the water vapour present in the air and it trickles down. The soil in these forests are really special as they are mostly made up of dead leaves that fall throughout the year from the evergreen trees above. You can only witness this if you got a chance to get into a shola. You cannot see your foot when you walk in a shola forest as it would be buried deep in the leaf litter and that makes the soil so special. It acts like a sponge and absorbs the water that it gets through rain or condensed mist. Since, these forests are found in the slopes mostly, the water that is retained in the soil begins to flow out of the forest in a trickle (Due to gravity? or The soil loses water being unable to hold anymore? May be both!) The trickles join to produce streams. So, it is a thumb rule of shola forests – a stream in every patch of shola. No matter how big or small the patch is, it will have a stream coming out of it!

The Shola grassland complex is an interesting eco-system that looks after itself. We just have to watch them from a distance without ever interfering their harmony. The plants that occur in Shola forests are brilliantly evolved and they have placed themselves so beautifully that they cannot exist if they were in other places. They cannot even exist elsewhere because, the conditions are just not right for them. They have to be in their place to survive. Let me explain that a bit more with some examples…

This impatiens is found along the streams in shola forests. If not along the streams, they will at least it should be a trickle of water which should have brought the seeds there! Impatiens elegans is endemic to Tamil Nadu and Kerala. This one was found in the Anamalai Hills of Valparai, Tamil Nadu.

This is particularly a beautiful Impatiens species found in the Anamalai Hills. It is endemic to Tamil Nadu and Kerala and it is an endangered species. It is strictly found along on the streams in shola forests.

These are also strictly found along streams or trickles where there is a continuous supply of water. They need continuous water flow and moisture to thrive.

These Impatiens are some best examples for the fragile nature of the Shola species. They just cannot survive out of their environment!

This phenomenon can be seen right from the point where the Shola forests start from the grasslands. The Daphniphyllum neilgherrense is a tree that is found only along the borders of Sholas. They are excellent pioneer species. The name “Pioneer Species” is given to those species that establish themselves first and conquer a landscape. D. neilgherrense grows happily in the borders of the Sholas and it can withstand great variations in temperatures during the day and nights. But the other shola species cannot tolerate this variation! They are hence great trees that help in Shola regeneration.

It is an entirely different story when it comes to the grasslands adjoining the shola forests. It is a perfectly balanced ecosystem of the forests in valleys and grasslands everywhere else. The grasslands occupy wherever the Sholas cannot establish themselves or in short, they cannot exist there! There are several reasons attributed to it.

Second, the soil variation between the grassland and the shola. There is a great variation in the composition and nature of soil present inside the Sholas and the grasslands. In the Sholas, the soil is particularly rich (and possibly one of the richest in the World!) mainly constituting of dead leaves from the evergreen trees above. This makes the shola soil a great sponge that can absorb a lot of water and retain the most of it. While the soil in the grasslands is poor in nutrients and cannot support trees in it. It’s water retention capacity is also too low. So, only grass, the incredible survivor can live out there.

Third is the frost and cold winds, which can kill off any Shola species easily. The Shola grassland complex is usually found in the highest elevations of the Western Ghats (above 1600 Mean Sea Level) and these regions can get really cold and is mostly windy and covered in fog for most of the year. Any seeds of the shola species getting dispersed in the grasslands may not sprout at all. Even if they sprout, their leaves will be damaged by the frost and cannot survive successfully in the open grasslands. While the grass and other grassland species are resistant to frost and only they can survive there.

or Neelakurinji, that flowers gregariously every 12 years truning the hills blue. Thereby, the reason for the name “Nilagiri”, meaning Neelam – Blue and giri – Hills in Tamil.

Other grassland species that I have to identify yet!

It was a great trek overall and finding a lot of endemic species and there were less exotic and invasive species here in the Velliangiri hills as compared to the Nilgiris. Yet, they have to be protected for a sustainable human life as well as to preserve biodiversity… 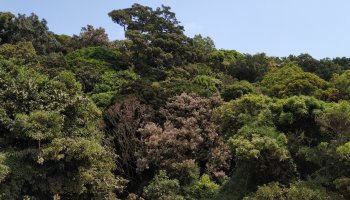